Stable is the Word in the Canadian Housing Market 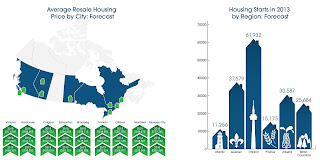 TORONTO, June 25, 2013 /CNW/ - After three years of varied periods of growth and decline across the country, the Canadian housing market is starting to stabilize, according to the latest housing report released by Genworth Canada.  While the economy continues to strengthen, modest growth in the housing market is the trend for the next five years.

"The Canadian housing market is transitioning to a balanced level of supply and demand," said Brian Hurley, Chairman and CEO of Genworth Canada. "While lower demand has cooled the housing market, this latest research shows moderate growth over the next few years which points towards a more stable market for both buyers and sellers."

The current condition is due in part to the tightening of regulations, but also continued warnings to consumers on their debt levels.  Consumers appear to be heeding the advice and stabilizing their financial position before the Bank of Canada begins to raise its rate. The Spring 2013 Metropolitan Housing Outlook notes that healthy employment gains since the end of the recession have helped move mortgage payments in arrears and bankruptcies to a downward trend, except in British Columbia where payments in arrears have flattened after an upward trend from 2008 to 2010.  Despite the low interest rates, price growth for both new and existing homes has been decelerating.  The report also notes that while total mortgage approvals are falling, this decline is entirely fuelled by resale homes, as mortgage approvals for new homes increased by 3.4 per cent.

To read more about the Canadian Housing Market - click here!
Posted by Amy Wilson at 4:09 PM