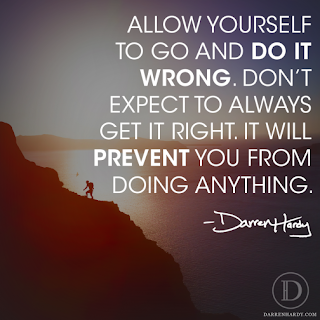 This Quote was taken direct from Darren Hardy's Daily Mentoring that I have been following every morning.  He has some fantastic views and advice and I wanted to share one with you today.

"This isn’t a new phenomenon.
You’ve heard me multiple times stress that in order to achieve BIG SUCCESS…
you have to be willing to go for BIG FAILURES.
But are you really doing it?
Let me remind you…
Walt Disney was fired from the Kansas City Star because his editor felt he “lacked imagination and had no good ideas.”
Oprah Winfrey was publicly fired from her first television job as an anchor in Baltimore for getting “too emotionally invested in her stories.”
Steven Spielberg was rejected by the University of Southern California School of Cinematic Arts multiple times.
In one of Fred Astaire‘s first screen tests, an executive wrote: “Can’t sing. Can’t act. Slightly balding. Can dance a little.”
Vera Wang failed to make the 1968 US Olympic figure-skating team. Then she became an editor at Vogue, but was passed over for the editor-in-chief position.
Theodor Seuss Geisel, better known as Dr. Seuss, had his first book rejected by 27 different publishers.
R.H. Macy had a series of failed retail ventures throughout his early career before he finally launched Macy and Co., today known as Macy’s.
Each person above went on and grew to #BeTheException*
And so can you!"