No crash in store for Canadian housing market. 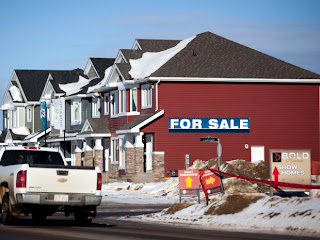 TORONTO — A slowdown in Canada’s housing market will continue through 2013 and years of stagnation may follow, but no crash is likely because demographic trends will support demand in the medium term, a report by Scotiabank said on Monday.

The report by Canada’s third-largest bank said that home sales have already dropped more than 10% from spring 2012, with prices leveling off but not yet falling except in particularly hard-hit markets.

A slowing housing market could deal the most damage to CIBC, National Bank and TD, according to new a report by Barclays Capital. Housing, which slowed but did not crash as a result of the global financial crisis, helped sustain Canada’s economy through much of 2010 to 2012 but is now starting to slide just as the U.S. housing sector has begun a clear recovery.

While Canadian home sales may continue to slump, the report said, prices will likely remain above year-ago levels until at least the second half of 2013, and will not drop as dramatically as they did in the United States.

Click here to continue reading.
Posted by Amy Wilson at 10:24 AM